We are now closed for the Winter Season! Our access will remain temporarily open on Monday for those pulling remaining houses off the lake. As always, drive at your own risk.

On Tuesday, 3/3/2020 we will be closing the main access to car/truck/wheel house use because of deteriorating conditions on our shoreline. For those wishing to walk or ATV, there will be room to get by alongside our Red F-150 as you come straight down the hill.

Thank you for another great winter on Lake Waconia!

We will update you with potential spring opening hours once the ice is off the lake and we have begun installation of our dock system.
Posted by In Towne Marina at 4:05 PM No comments:

We’ve had a lot of questions about this weekend’s warmer weather and the effect on our access and roads. Average ice thickness is between 20 to 25 inches. At this point the lake and our access are in excellent shape! The roads are a little bumpy, but have firmed up nicely. Low temps tonight are supposed to be around 10 degrees, so that helps too. Saturday and Sunday are supposed have highs around 40 or in the low 40’s. Lately when we’ve had temps like that, the access looks worse than it is. Sunday will likely be the worst of the 2 weekend days. Things will get sloppy, the roads will get bumpier and there will likely be puddles/potholes to avoid, but we don’t expect any major issues through the weekend. Of course things could always change if temps are higher than predicted. We will let you know if there are issues to mention. The daily access fee is $4.

Just a reminder, we close for the season after Sunday, March 1st. Also, fish houses must be removed from the lake by Midnight on March 2nd.

We’ll see you on the ice!
Posted by In Towne Marina at 9:38 AM No comments:

We’ve got 8 days left of our Fish House Rental season! We will be renting through Saturday, February 29th, so get scheduled with a rental by calling (952) 442-2096. Click on this link for prices and polices… https://drive.google.com/file/d/1UxHHzr7rX6HPs-n7OV1YW_Eilp940Wi5/view

We will be closing for the season after Sunday, March 1st. Our access will remain temporarily open after March 1st as long as it’s in reasonable condition and we don’t get lots of snow. We will not be plowing it after March 1st.

This weekend through February 23rd is the final weekend of Gamefish season, so you won’t be able to fish for walleyes, northern pike and bass until the Fishing Opener on May 9th (with bass being catch-and-release only until May 23rd).

New 2020 Fishing Licenses are now available for sale too! Keep in mind, you STILL NEED a 2019 fishing license through February 29th. The new season starts March 1st, but it’s nice to be prepared early.

Fish Houses, Dark Houses and Portables must be removed from the ice no later than midnight March 2nd.

As for the fishing, we continue to hear very good crappie reports in the deeper water of Wagener’s Bay. 20 to 25 feet of water, fishing 4 to 8 feet off the bottom has been the ticket most evenings. Sunfish are still biting, although less aggressively in 12 to 14 feet of water near Center and Pillsbury Reefs as well as into the south side of Wagener’s Bay and parts of Waconia Bay. Crappies can be found in these areas too! Unfortunately we do not have any big minnows available for the Northern Pike, but if you do have some of your own, the bite has picked up some the past 2 weeks. We are fully stocked with crappie minnows, fathead minnows, wax worms and larva!

Good news! Our main plowed road coming from the In Towne Marina goes past Waconia Bay to Center Reef, Pillsbury Reef and out to the deep water of Wagener’s Bay. There is also a road that goes from Waconia Bay ending at the SW side of Kegs Reef, which we hope to expand some this week. Also, we plowed to the center of Cemetery Reef, which goes past the walleye hole between the marinas. Those with 4-wheel drive trucks can still get around off road, although it’s always good idea to be prepared with a shovel.

We’ll see you on the lake! 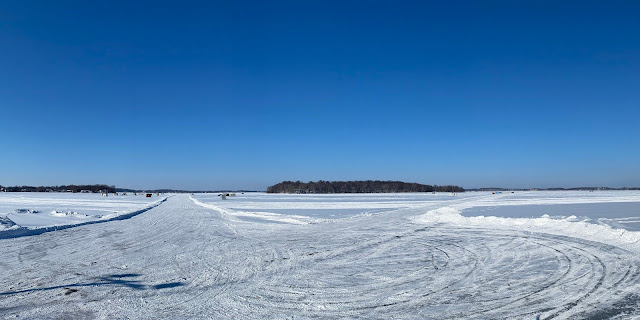 Posted by In Towne Marina at 1:12 PM No comments:

Conditions on Lake Waconia remain excellent. Thankfully temps cooled down nicely after last weekend’s mild weather. Sunday’s warmth and sunshine melted some of the snow and minimal surface ice on lake roads causing bumpy conditions after things re-froze. We closed part of our access Monday morning to let it heal up and have now fully re-opened it. The main lake road from the marina is also in much better driving shape after we smoothed it out this week with the V-plows.

Fishing has remained good in early February. Sunfish have continued to bite well during the day, usually in 11 to 14 feet in Wagener’s Bay, Pillsbury Reef, Center Reef and Waconia Bay. Sorting needs to be done to get keepers, but it’s still very possible to bring a nice meal home. Crappies have been found in the same areas in the evening, but have been more active deep in 20 to 24 feet in the hole of Wagener’s Bay. We’ve had some nice crappies shown to us in the 11 to 14 inch range the past couple of weeks by those qualifying to play our FREE Ice and Dice game. The game ends Sunday, 2/16, so bring your catch in for your chance to win! Northern pike activity has picked up too. Action started slow for pike, but we’ve had good reports of varieties of sizes being caught on sucker minnows near the shallower panfish areas described above. Bass have also continued to surprise in those same areas. Walleyes haven’t been as active this winter as other years. Those having success are out in the early morning hours or spending the night away from the large crowds. Don’t give up on chasing them as we still have 2-1/2 weeks left in the Gamefish season, which ends after Sunday, 2/23.

We still have some openings for Fish House rentals in February! Call (952) 442-2096 to reserve. Our houses are comfortable, warm and ready to fish with the holes drilled. All of our rentals are in good sunfish, crappie and northern pike territory in 12 to 13-1/2 feet of water. For more information, check out our Fish House Rental page here… https://intownemarina.com/fish-house-rental 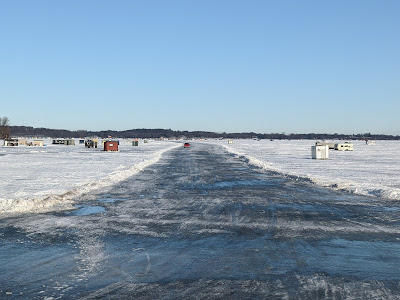 Posted by In Towne Marina at 7:29 AM No comments:

Ice is averaging between 13 to 17 inches in the areas we have checked and have plowed roads to. We have a great road plowed from the In Towne Marina past Waconia Bay and out to Center Reef and Pillsbury Reef ending near the Rock Dock in Wagener’s Bay. The road is nice and wide and if you need to get off the road, there are plenty of areas to do so plowed by us and guys with their own plows (thanks guys) to find your own fishing spot. If you are looking to get away from the large groups of houses, it is possible to get around off-road to other reefs on the lake with 4-wheel drive. We always suggest checking ahead of yourself if you’re going to an unused or lightly-fished location.

The bite this weekend was very good for sunfish and crappies. One of the pictures below is of Don with his big 2 pound 7 ounce crappie caught on Friday night. Another pic below is of 11 year old Jaidee with her nice 11.4 ounce crappie. Both won prizes on our FREE Ice and Dice game! The bite for sunfish has generally been best during the day with anglers finding them in 10 to 14 feet of water on wax worms. Crappies can be found in those similar areas, but also have been starting to bite deeper too in up to 20 feet on crappie minnows. There has been a continued surprising bass bite at times for some who have pulled a few largemouths out while panfishing. Walleyes have been best in the late evening and overnight hours generally in quieter locations in 14 to 20 feet of water.

We are in the full swing of our Fish House Rental Season! We’ve got 5 rentals on the ice. 2 of them are 4-hole houses, 1 is a 5-hole and 2 are 6-hole houses. We drill the holes, the heat is on and ready for you too fish! They are currently located around 13 feet of water for good daytime sunfish and evening crappies! If you’d like to make a reservation, please call (952) 442-2096. 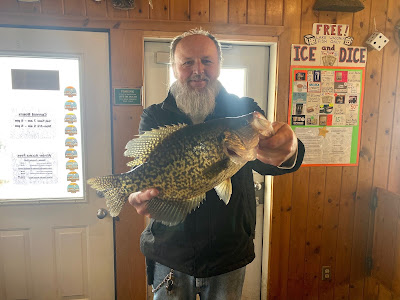 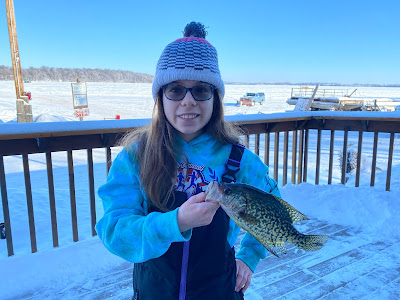 Posted by In Towne Marina at 11:12 AM No comments:

We have been asked a lot about the ice for the upcoming weekend and the ability to bring bigger houses out to Lake Waconia. Current thicknesses we have checked range from as little as 11 inches up to 17 inches (it’s common to find ice between 13 to 16 inches). While the ice is definitely getting thicker and current conditions allow for tandem wheel houses to be brought out, our concern coming up has more to do with the predicted snow and wind event Friday into Saturday. If you are bringing a house out to Lake Waconia for this weekend, we will not be plowing until the snow stops and WIND SUBSIDES.

We will keep you updated as we know more.
Posted by In Towne Marina at 10:39 AM No comments: