The summer season is winding down and daylight is getting shorter. With school starting for many families and some of our summer staff moving on to their education, we have shortened our store and gas pump hours. Currently through Labor Day we are open Monday thru Friday from 8:30 am to Sunset, and on Saturday & Sunday from 7:30 am to Sunset. Gas Pump Services ends at 7:30 pm. After Labor Day we will update with more shortened hours.

While the season got off to a late and slow start in June, we have had wonderful weather in July and August! Fishing has been very good longer into the season than normal. Sunfish action has been excellent all summer long, with many caught that were bigger than what we normally see out of Lake Waconia. The bite for sunnies has been so good, that walleye anglers have been frustrated with the constant biting of their leeches, crawlers and even minnows. Many different depths have worked for the sunnies, but you’ll generally always have success in or on the edge of the weeds around 12 feet of water. An easy spot to always try is on the southeast side or north side of Coney Island. Don’t be surprised to find action for crappies and bass too in those depths as they have been good as well. Bigger bass has been caught in the weeds off reefs such as North, Cemetery, Center and Pillsbury. Don’t hesitate to hit up the super shallows using topwater lures for some exciting bass action as well. As far as walleyes, the bite lately has been deeper. Locations such as Keg’s, Red’s or the east end of the island are all worth trying. Depths from 17 to 25 feet have produced some success with fathead minnows. Northern pike continue their resurgence on Lake Waconia. We aren’t up to the numbers from 20 years ago, but it’s fairly common to catch some pike if you’re targeting them, and even if you’re trying to get bass or walleye, anglers have had surprise pike bites. Muskies have gotten more active in August. We’ve had reports of catches in the upper 30’s to low 40 inch range, with one even up to 53 inches reported earlier in the week. Areas by the weeds of North and Kegs reef are good locations, as well as the weedline on southeast side of the island. Working the south shoreline weeds to the east toward the beach is also well worth targeting muskies.

We have a couple of quick notes we want to share regarding our slip and buoy members at the marina. We are thankful for all of the families that have chosen the In Towne Marina to trust us with their boat this summer! We celebrated another season with them in late July by having a fun get together with buffet lunch, drawing prizes and an informal fishing contest. Fun was had by all and there were some impressive fish caught. The Royer family won our grand prize drawing. As for the fishing contest, the winning sunfish was caught by young Logan DeMarce with a HALF POUND Pumpkinseed! Robbie Olson had the winning bass at over 2 pounds.

As I previously mentioned, some of our staff have moved back to college recently, and we celebrated them last week with our Employee Fishing Contest! Of course a full year’s worth of bragging rights were at stake, and the winners were Ben Hester and Kort Oelfke, with over 10 pounds of bass to take 1st Place! We’re thankful for the job our wonderful staff does!

Come out to the lake while the summer temps are still here! We will be renting fishing boats and pontoons through the 2nd weekend of September. Give us a call at (952) 442-2096 to reserve!

We look forward to seeing you at the lake! 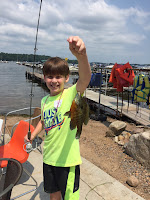 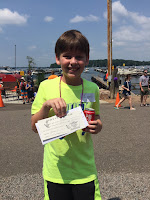 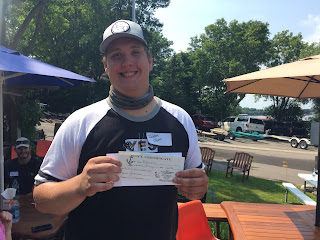 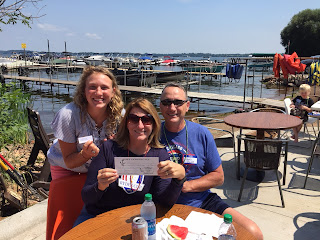 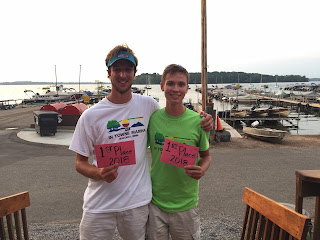