We hope everyone has had an enjoyable Labor Day weekend! With the summer coming to a close, we are changing our hours starting tomorrow (Tuesday, 9/5/17). Monday thru Friday, we will be open from 11:30 am to Sunset.  Saturday and Sunday we will be open 8 am to Sunset. We close for the Summer Season after Saturday, September 30th.

The month of August, while cooler than normal for the pleasure-boaters was a good one for fishermen.  Water temps stayed much cooler than normal (hovering around 70 degrees lately), which made fishing better. We had one of the best months of Northern Pike fishing in years, and that has continued into September. They were actively biting in many different depth ranges and on many varieties of lures and baits.  Typical areas to target included Anderson’s Reef, Cemetery Reef, and Center Reef among others. If using live bait, sucker minnows were a popular choice.

Sunfish, Crappies, and Bass continued to be active as well.  Fishing the weedlines in 11 to 13 feet of water was common for success.  Some days crappies were found deeper off reefs such as Kegs and North Reefs in 15 to 18 feet of water.  Sunfish could be found in 6 to 8 feet of water as well.  Waxies or crawlers were used to catch some nice ones.  The bass, while bigger off the deeper weed edges were also good in the shallow water reeds, the Rock Dock or near the Carp Trap (Peterson’s Creek on the NW side of the lake).

Walleyes should get nothing but better as we get into the Fall.  This summer’s walleye bite was good, but as the season progressed, it was important to target them during the early morning or late evening hours for best success.  Kegs Reef, Reds Reef, and Cemetery Reefs were all areas that produced some nice walleyes.  Fathead minnows were commonly the best bait.

Muskie action picked up in August as well and should continue well into September and October. Bucktails and big topwater baits worked well for some.  Areas like North Reef, Kegs Reef and Center Reef have all been muskie territory.  However, it never hurts to target weedlines like those in Waconia Bay and out from the south shoreline from Lola’s toward the beach.

Our Fishing Boat and Pontoon Rental season is coming to a close shortly.  This time of year, we highly recommend calling for reservations. We for sure will be renting thru next weekend (the 9th and 10th).  After that, we will likely be prepping them for winter storage.  However, if you call us and we still have a boat or pontoon available, we will be happy to rent!

Here are a some nice pics of fish caught the past few weeks... 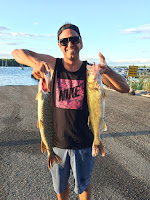 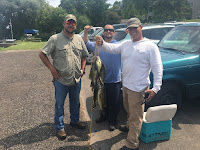 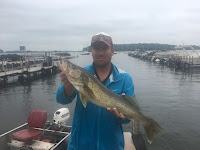 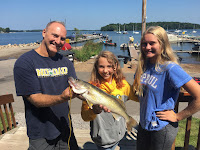 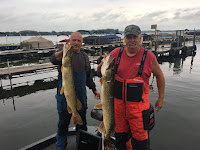