What better way to end our summer season than with a double rainbow! Our bait shop is now closed as of September 30th. The access will be closed to all now too for maintenance and dock removal. Thank you for business and patience with us during this difficult period of Covid-19. We hope many of you found Lake Waconia to be your place to escape the madness of it all. We look forward to the ice fishing season and will update our store opening hours as the ice forms and begins to thicken. Have a wonderful fall season! 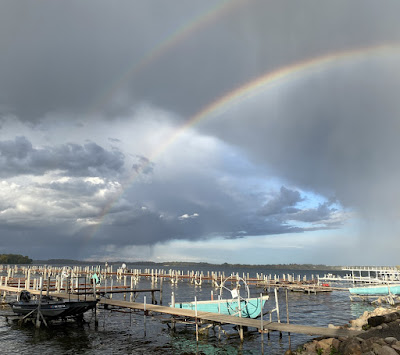 First and foremost we would like to thank everybody for the great summer! We are done renting our pontoons and fishing boats for the season. Our bait shop will remain open until the end of September. Our hours are Monday through Friday 11:30 a.m. to sunset and Saturdays and Sundays 8:00 a.m. to sunset. Gas pump service ends nightly at 6:30 pm.
Cool temperatures across the state in the last week signaled an early start to fall. We have been seeing water temperatures swing from the low to mid-sixties, and some of the fish have been starting their early fall patterns.

Sunfish are still biting consistently on the weedlines in 10-14 feet of water. The north side of the island and Pillsbury Reef are two areas worth checking out. Small pieces of night crawlers or wax worms are both effective baits for sunfish. This time of year, there is a deeper bite for crappies as well in 18-24 feet of water. Deeper water off the edges of reefs such as Anderson’s and Keg’s has been holding fish. Use your electronics to find a school of crappies, and it’s game on! Once located, these fish are usually very willing to eat. Crappie minnows and gulp are both good options for targeting these early fall crappies.

The bass fishing has remained good on Lake Waconia. The most consistent bite for bass is in shallower water on a variety of artificial baits. Senkos, ribbontail worms, and football jigs are all good options. The deeper weedlines off of the reefs are worth noting for bass as well. Some of the bigger bass in the last week have come from the deeper water.

Walleye fishing has stayed inconsistent, but expect it to pick up in the next few weeks. The anglers that are having success are jigging with fatheads off the edges of the reefs such as Keg’s and Anderson’s.

The musky and pike activity in the last two weeks has been the best it has been all year. Medium to large sucker minnows have been turning northern pike on the weedlines down by the swimming beach and in Wagner’s bay. Artificial presentations such as spinnerbaits will work as well. There have been lots of nice pike being caught on the lake, many in the mid-30 inch range. The musky action has really improved with the falling water temperatures. Lures such as bucktails, topwaters, and bulldawgs have raised fish. Depths from 5 to 15 feet have all been holding muskies.

We will be closed for the season after September 30. Now is a great time to get in some of the fantastic early fall fishing the lake has to offer.