The following is a small update; a more expansive ice check will be done tomorrow when temperatures are more bearable.

We just got off the lake to get you an ice update. With today’s extreme cold, this was more of a checkup- not a full ice examination. We are finding 8-11 1/2” in Waconia bay and the Walleye hole. The Cemetery Reef area had 7 ½”- 10”.

We plowed a large area in front of our Marina with our ATV. The plowed area had 10 ½-13” of solid ice. These extreme cold temps have been wonderful, but the ice isn’t as thick as it would have been had we avoided the 5” of insulating snow we have on the majority of the lake.

Check back here tomorrow afternoon for more info and have a Happy New Year!

Fish House rentals are back on the ice!

We just got off the ice for another update today (12/24) after drilling over 100 holes.  We went out to Waconia Bay, the Walleye Hole between the marinas, Cemetery Reef, the SE side of the Island, “Under the Wires”, Center Reef, Pillsbury Reef and Wagener’s Bay.

The thicknesses we measured were very similar to what we reported last Wednesday (12/17).  While we had gained a little ice last Wednesday night and Thursday night while it was cold, we have since lost a little during this warm-up and rain.  Therefore, that is why we have similar readings to last week.

With cold weather around the corner, we look forward to much better ice soon!

We will be closed tomorrow, Christmas Day.  We will see you Friday!  Merry Christmas!
Posted by In Towne Marina at 12:09 PM No comments:

We will be open tomorrow for Christmas Eve from 7:30 am to 4:30 pm. Christmas Day we will be closed. Normal Hours will resume on the 26th! Have a Merry Christmas!
Posted by In Towne Marina at 1:01 PM No comments:

Once again the unseasonably warm weather and rain is upon us. There is a fair amount of water on top of the ice on Lake Waconia. With wind in the forecast for tonight and tomorrow, we have decided to remove our two rental houses from Waconia Bay. We don’t want to worry about the wind swirling around the fish houses allowing the water to carve out the ice. At this time we are recommending people at least check on their fish houses if they are currently out on the ice. We will be placing our houses on the lake again as soon as conditions allow.
Posted by In Towne Marina at 1:09 PM No comments:

We have Rental Fish Houses ready to go!

We are renting fish houses in Waconia Bay! If you reserve for 6 hours in the morning, we will drop you off with our sleigh* and pick you up when you are done in the afternoon!  If you reserve in the afternoon, we will drop you off, but you will need to walk approximately 400 yards to shore when you’re done at night (bring a sled if you have a lot of gear).  It’s time to get on the ice for the bite!  Call (952) 442-2096 to reserve.

*Sleigh rides are weather dependent and for a limited time (while our access is closed to car/truck traffic). 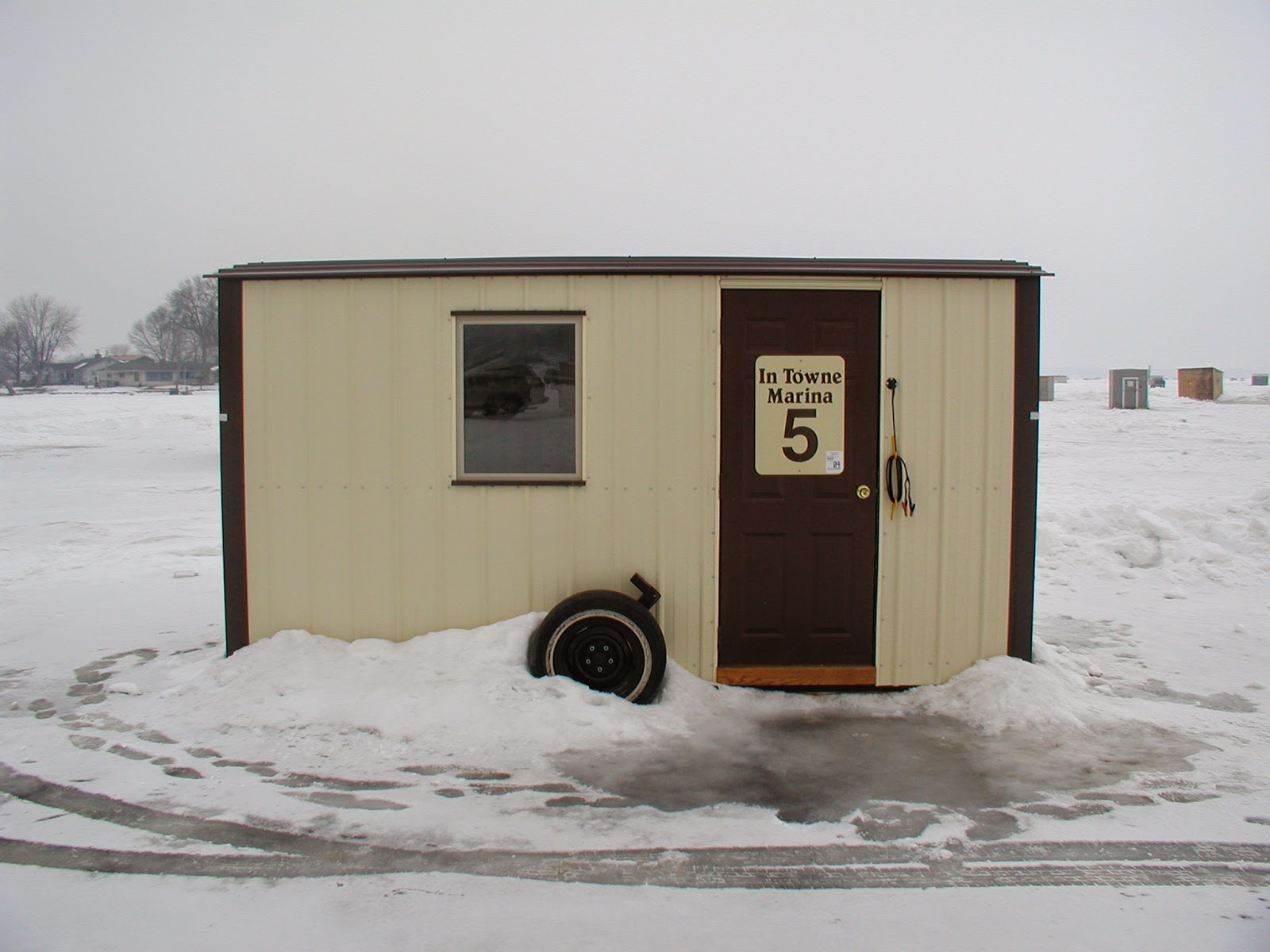 Posted by In Towne Marina at 2:44 PM No comments:

We spent a full day on the ice today (12/17) to get you the current conditions across the lake. Not surprisingly, the warm weekend of 50 degrees and rain did affect the thickness of the ice.  In a lot of areas we lost between 1 to 2 inches of ice from our previous report last week.  Despite the warm-up, we are still very happy with the condition of the ice.  We felt comfortable on 4-wheelers while doing this ice check.  We drilled hundreds of holes today, but keep in mind, we cannot cover 3000 acres in it’s entirety.  That is why we always recommend checking ice yourself if you’re going to an area away from the larger groups.

Here’s what we found where we checked…

We also went looking for a couple of the springs that have been active in recent history.  We did find the main one that has been the largest over the years, and it was mildly active.  It’s located in the deep water between Cemetery and Anderson’s Reefs and is now marked with lath board and flagging tape.  Thankfully it’s much smaller than the past, but we will be keeping an eye on it.  We are happy it’s not very active, as that may be a sign that some of the other smaller springs that we’ve noticed in previous years might not be an issue this winter.

If you’ve been following our ice updates this winter, you may notice in the above report that most of the areas that froze last, like North, Kegs, Anderson’s and Cemetery, have less ice and are more varied.

So, what does this all mean?  This week and weekend, we feel comfortable with anglers getting out on the lake with ATV’s and Snowmobiles and lighter-weight skid and wheel fish houses through our access.  We will not be allowing cars, trucks or heavy fish houses through our access until further notice.  Don’t forget, our daily access fee is $1 for walking, $2 for ATV or Snowmobiles, and $25 for the winter season.

We look forward to seeing you on the ice!

Posted by In Towne Marina at 3:19 PM No comments:

We did a more extensive ice check on Tuesday, 12/9, drilling and checking over 200 holes.  We covered Waconia Bay, "Under the Wires", Center, Pillsbury and Wagener's Bay, as these areas are currently the most used fishing spots on the lake.  It's important to know that we are always looking for the worst ice we can find, therefore the majority of our drilling is in snow-covered ice, which is generally less than the clear "black" ice.

We started in Waconia Bay, and found a lot of 8 to 10 inches, with a top-end of 12 inches in the clear, snow-less ice.  Then continued on to "Under the wires" (between the south peninsula of the Lakeview Terrace and the island), where there was as little as 7 inches of ice under snow drifts and up to 11 inches of ice where there was no snow.  A little north of "Under the Wires" was a small area of 4.25 to 5 inches which was the worst ice found of the day.  As you continue even further north of that, the ice got very jagged (where the wind broke up chunks while the ice formed, which froze in a jagged manner creating sharp pointed edges).  A lot of that jagged ice was around 6.5 to 8 inches.  These locations are northwest of the island, but east of where our road usually goes to Center, which gives you reference for the future.

We then headed a little west on the way to Harms Point to the area we usually have a road, and found a lot of 8 to 10 inches with a little bit of 7 inches mixed in.  From there we went north to Center Reef and had a variety of ice there as well.  We could drill in one popular location and find a spot with as little as 6 inches, and 10 feet away measure a hole in clear, snow-free ice that was up to a 12 inches.

If you're sensing a theme, you are right.  It didn't matter where we went today, the ice greatly varied.  It's easy to get excited when you see 10 to 12 inches of ice in locations you want to get to.  We are excited to see those thicknesses too, but it was clear to us today, that most areas with those thicknesses also had plenty of ice mixed in between 6.5 to 9 inches as well.

Pillsbury was much the same.  There are certainly plenty of locations there that had 9 to 12 inches, but had 7 to 8 mixed in.  We went from Pillsbury to the south toward the Wagener's Bay access.  We drilled in several locations where snowmobiles and 4-wheelers have made tracks going to and from those locations. Where there was little-to-no snow, we found 10 to 12 inches of ice.  The closer we got to the terrace, there was more drifting of snow, so as you can expect, there was a lot of 7 to 9 inches of ice (with as little as 6.25 inches found 40 feet from shore).

We are very happy we have ice that we can use to 4-wheel and snowmobile on.  While it's tempting for some to want to drive your car or truck out there, we are not recommending it and won't be allowing vehicles through our access for the time being.  No one wants driveable ice more than we do at the marina, but we will continue to be patient and wait for the ice to get a little thicker before we drive.

In the mean time, we'll keep you posted on the ice as the warmth of the weekend draws near.  If you have a permanent fish house on the lake, it would be a good idea to keep a close eye on it this weekend.

As for the bite, it was a good weekend for northern pike fishing for those who took advantage of the mild weather.  The pic of the weekend was by twins Connor and Tanner Besse who each had a nice northern and won prizes playing our FREE Ice and Dice game.  Waconia Bay was a good location for some of this action.  Walleyes were also decent as well.  We had some keepers over 16 inches caught from the walleye hole between the marinas, as well as Waconia Bay and parts of Center.  Sunfish and crappies continue to bite, although as expected, sorting needs to happen to get keepers.  Pillsbury is a great go-to spot for panfish as well. 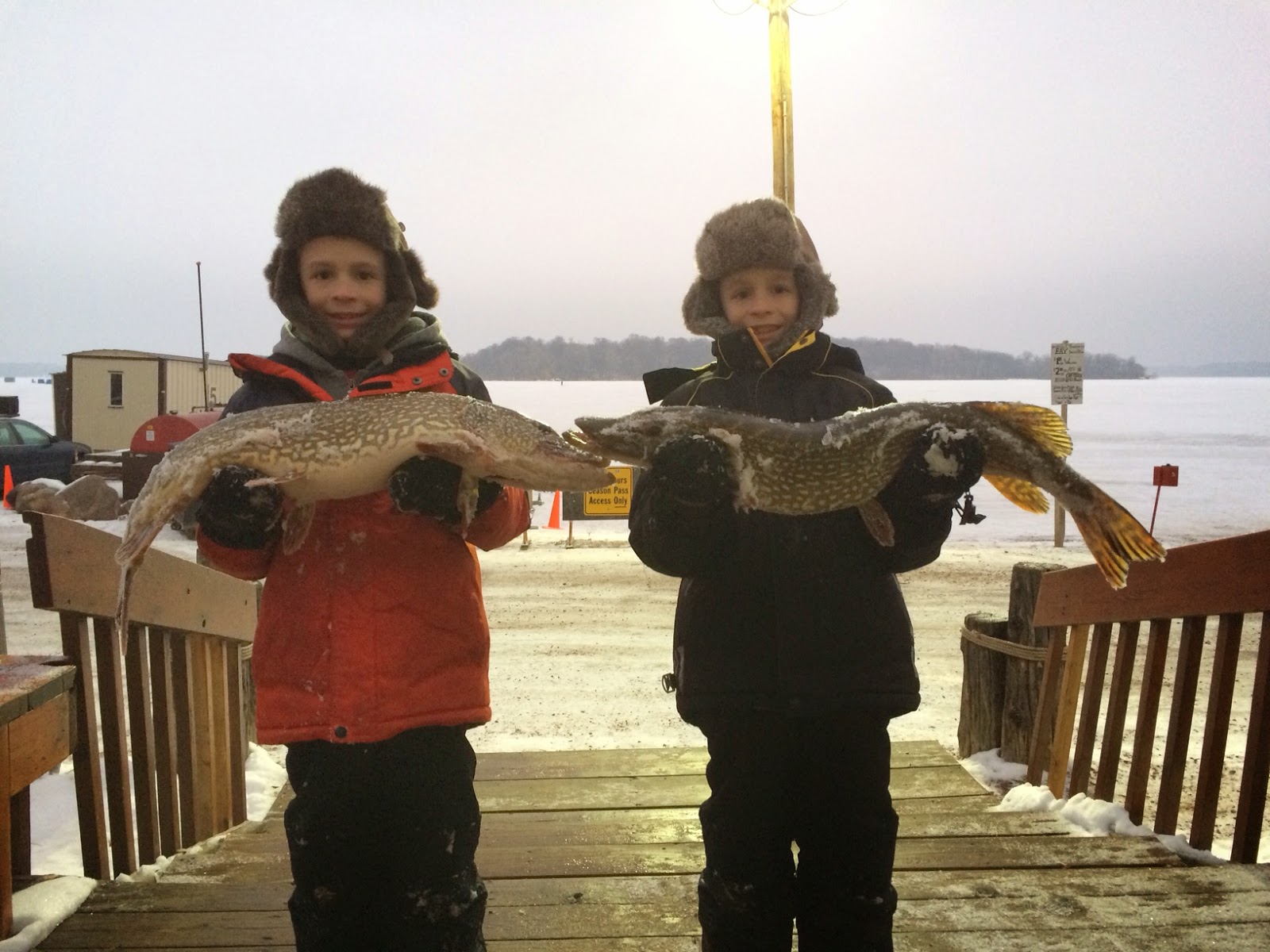 Happy fishing!
Posted by In Towne Marina at 10:16 PM No comments:

We did another ice check yesterday afternoon and continued to see ice thicknesses increasing.  Most of the main areas anglers like to target early season are in great shape.  Waconia Bay has between 7 to 9.5 inches (with a small marked area of 5.5 inches).  The walleye hole between the marinas has ice around 6 to 9 inches.  Ice out towards the Deep hole in Wagener’s Bay and Pillsbury is between 7.5 to 9.5 inches.

We continued our check north of “Under the Wires” between the west end of the island and Lakeview Terrace.  While the ice has grown there too, we still found some spots in that area with as little as 4 inches and up to 7.5 inches.

We headed to Cemetery as well to get a better feel for the varying ice there, and found anywhere from 5 to 8.5 inches.  The newest ice which formed over part of Cemetery and a little east has caught up nicely, however we have not been out to Anderson’s, Reds or Kegs.  We haven’t assessed if the springs from past years in the 25 to 30 foot areas in the east-central part of the lake are active yet, so keep that in mind if heading that way.

As far as fishing goes, we’ve had some reports of successful sunfish and crappie action off the weedlines of Pillsbury as well as Waconia Bay in 11 to 14 feet of water.  Walleyes have been decent between the marinas in the walleye hole.  Most of the successful bites have been on the north side of the hole as depths climb in the 13 to 15 foot range.  Jigging with fatheads has been working, as well as set-lines with shiners.

With the warm up coming this weekend, it’s a great time to get some sucker minnows and set a tip up or two!  We expect a good northern pike bite for those interested.  Our big fish of the season so far was weighed in at 9 pound 12 oz. pike on Tuesday  by Bob Leistiko. 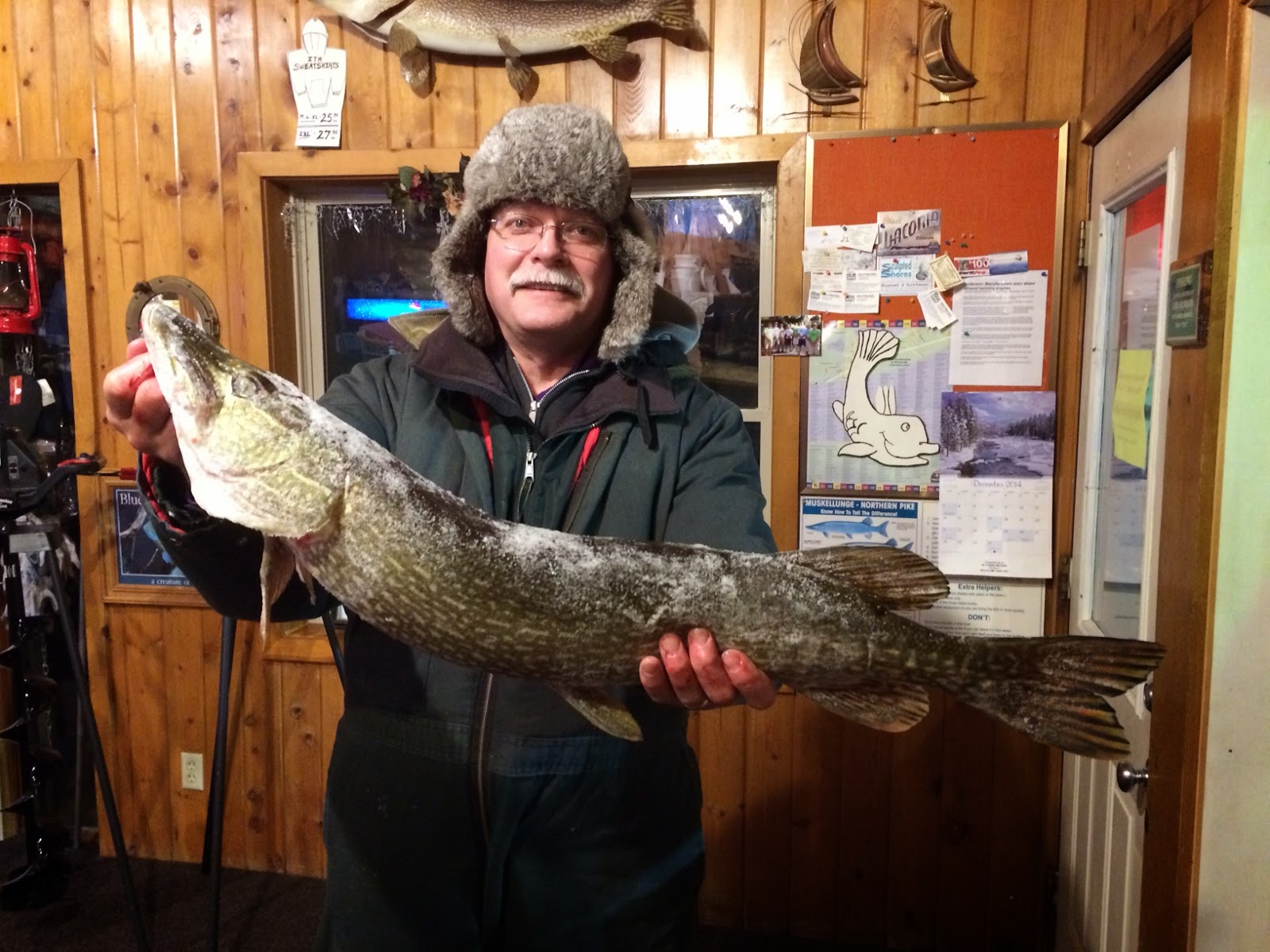 We hope to see you at the lake!
Posted by In Towne Marina at 10:12 AM No comments: